More than one third of Delhi slum children malnourished – survey 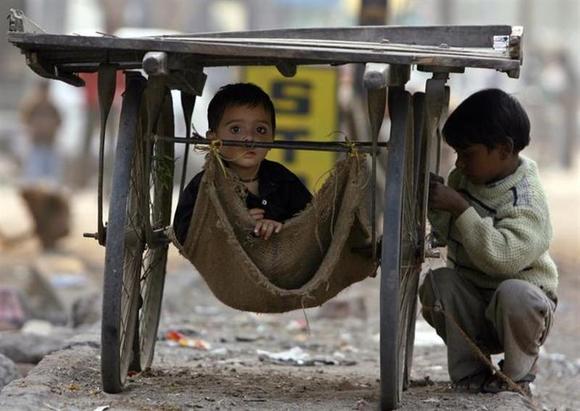 Children of slum dwellers play under a pushcart in New Delhi December 19, 2006.

NEW DELHI (Thomson Reuters Foundation) – More than one-third of under five year olds living in the Indian capital’s slums are malnourished, a survey conducted by a child rights group said on Thursday, adding that this showed government child health schemes were not reaching the poor.

The study, carried out by the charity Child Rights and You (CRY), found that 36 percent of 3,650 children surveyed in Delhi’s slums lacked nutritious food and were underweight. One third of that percentage showed signs of severe wasting.

Overall, malnutrition was higher among girls than boys at 38 percent against 34 percent, the survey found.

“It is especially challenging for newborns and infants whose health entirely depends on the availability of the mother to breastfeed, the ability of the caregiver and household to provide nutritious meals, the quality of the public healthcare system and overall community support.”

India has some of the worst child malnutrition rates in the world, higher than parts of sub-Saharan Africa.

Nationally, 42 percent of children under five are underweight, 16 percent are severely malnourished, and almost 70 percent are anaemic – prompting Prime Minister Manmohan Singh to call the problem “a national shame”.

New Delhi, and most of its 16 million people, have prospered as a result of India’s stellar economic growth over the last two decades.

The city has built a much lauded underground train network, swanky office blocks and gleaming shopping malls filled with designer stores have sprung up, and luxury cars are now common on the congested roads.

But the wealth has been unevenly distributed, and despite doubling the size of its economy between 1990 and 2005, India has failed to wipe out the mass hunger which not only haunts the countryside but also lurks in the alleyways of urban slums.

Over the years, the government has spent billions of dollars on welfare schemes, but social activists say these are often badly run programmes riddled with corruption and that little of the money reaches the poor.

The CRY study found that just 30 percent of children under six were covered by the Integrated Child Development Scheme (ICDS) – a massive state-run scheme to feed children of poor families.

It also found that practices such as bottle-feeding, child marriage and discrimination against women were occurring in slum communities with little awareness that they were contributing to child malnutrition.

More than 50 percent of the malnourished children did not have access to clean drinking water and defecated in the open, leading to frequent bouts of water-borne diseases such as diarrhoea, the survey found.

“In 2012, Prime Minister Dr. Manmohan Singh stated that the problem of malnutrition is a matter of national shame. Despite that, fewer efforts have been made to tackle the gravity of the situation,” said Soha Moitra, CRY’s North region director.